The Adventures of Merlock Bolmes: THE MYSTERY AT THE CONSTRUCTION SITE 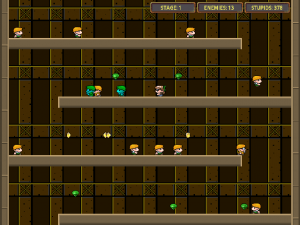 The Adventures of Merlock Bolmes: THE MYSTERY AT THE CONSTRUCTION SITE is a platformer game based on an unpublished and possibly unwritten story of the same title. It is tedium class and may be considered one of the geekiest platformers ever created.

The game features Bolmes jumping down from platform to platform on a construction site. Jumping down off screen lands characters back on the upper side, therefore limiting the game to a single screen.

Stupids are reduced by collecting coins and diamonds. Each coin reduces stupids by 1, each diamond reduces stupids by 2; collecting 5 coins or diamonds in a row yields a bonus of -10 stupids. When an item is collected, a new one appears on the screen two platforms away, so missing an item prevents the player from making a bonus next time as well.

The player's merry adventure is stifled by construction workers in helmets. Touching one will respawn Bolmes on the upper platform and reset the amount of stupids to the initial level. Jumping from platform to platform triggers a door opening and one more construction worker emerges. Therefore, the amount of enemies constantly increases. When it reaches 37, a Turbo Snail appears and destroys all workers in its path.

Another way to kill enemies is to use bombs, however each bomb costs +100 stupids, so bombs should be used only if absolutely necessary. Bombs do not hurt Bolmes.

Sometimes, a blue-green worker will appear. These are called “slimed workers” and will walk slower than the usual enemies. Bolmes can destroy slimed workers by mere touch and get -50 stupids as bonus. With each additional level this bonus increases by 10, so that on the second stage killing those reduces stupids by 60.

From time to time, a very fast blue-red enemy will appear. He is called “swifty” and will always emerge from the door on the topmost platform. Swifty passes through the level only once. He can be killed by a bomb or jumped over. The appearance of swifty is preceded by a special sound, letting the player prepare.

As the player proceeds through the levels, the game becomes harder. This is achieved not only through increasing the amount of stupids, but also by decreasing the probability of slimed workers showing up. Eventually, they are going to be few and far between.

Not only that, but because the amount of stupids constantly increases by 200 and slimed worker bonus is increased by 10, at some point using bombs becomes affordable: the bomb penalty is constant at a 100.

Therefore, winning the game means getting to a point when it becomes really easy to play. 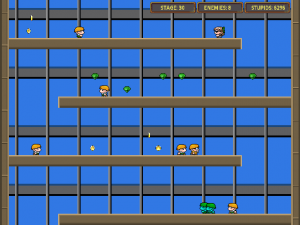 Stage 30 is different from other stages of the game. Knowing what the difference is increments your Obscurity Level by 1. This is also the only way to get the rank of Obscurity General.

The difficulty stems from being unable to kill the ever increasing amount of enemies and at the same time incurring a devastating penalty when touching one accidentally. Screen wrapping ensures that no place on the level is safe and the player has to constantly be on the move. The only way to win is to keep maneuvering between workers while collecting coins and diamonds, and wait for the amount of enemies to hit 30 for the Turbo Snail to appear and clean out the enemies.

The standard approach is to just try to power through. This strategy is preferable on earlier levels, but could be unattainable on later ones due to the low amount of slimed workers. It is still possible, but carries a high risk of getting stuck in situations that require a bomb. This might lead to staying at roughly the same amount of stupids and not progressing for a long time, or dying when you are half way through.

Enemy management aka “the follower strategy” is a way to organize enemies into groups. Since the player controls when enemies appear, although not on which platform, one can pick a worker, follow him, allow him to jump down, and jump down right after him. This places a possible new worker almost in line with the existing one or in line with a group walking in parallel on other platforms. Since Bolmes would end up landing in front of the worker, she would need to jump him over to end up following again and repeat the cycle. 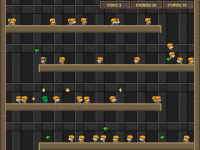 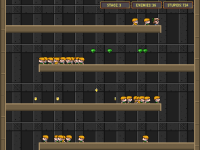 This cannot work perfectly since the time between triggering a new worker and when one actually appears is slightly randomized, as well as there being 1 in 4 chance that a worker will join the level on the same platform as the player, making it either more difficult or impossible to jump them over. But then the player can start “leading”, by jumping down ahead of the group, or, alternatively, kill the two enemies and continue jumping in line with parallel groups until a worker appears on the player's platform.

Enemy management does wonders and is one of the pleasures that the player can derive from a game. It does take time, but it is a sure method to beat any level and with practice carries little risk.

The penalty for touching an enemy is harsh: a complete reset of stupids. However, in most cases one should not be discouraged, since while a reset is definitely a setback, the amount of enemies is still growing. So, the focus should rather be on not dying when the Turbo Snail appears, so that all the gains made by it are saved.

Due to the tedious nature of the game, it felt necessary to give the player additional things to do. Fidgeting is the ability to make the character perform several actions that do nothing useful, but provide a wanted distraction.

There are three fidgeting actions:

The game does not explain how to make fidgeting happen: the player is supposed to find the right key combinations themselves.

Reception has been nonexistent due to nobody playing the game.

Matt from Hypothetical Game Review gave the game 0/5 stars, noting that “It looks like Lemmings, but you are in for a rude awakening: the game is garbage. I'd rather debate politics with my in-laws”.

Ralf was recorded as saying: “I think it could be enjoyable if you are on the phone, you know? When you need something to do, like when you can't zone out completely. The graphics are great. Although the assets come from different sources, it's all has this incredibly consistent feel. And the soundtrack is excellent! Maybe Mr. Verona should just stick to music?”

Except where otherwise noted, content on this wiki is licensed under the following license: CC Attribution 4.0 International